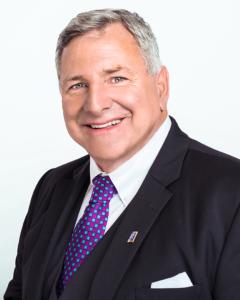 Ronald Phipps was the 2011 president of the 1,100,000 NATIONAL ASSOCIATION OF REALTORS®. Phipps has been a REALTOR® for 42 years and is actively involved as principal broker of Phipps Realty Inc. in East Greenwich, R.I., specializing in residential brokerage.

In 2006, Ron was the presidential liaison for Housing and Diversity. Phipps’ accomplishments include Operation Home Delivery, NAR’s and Habitat International’s joint venture to build 54 homes in the Gulf region for Katrina victims. At the state level, Phipps was President of the Rhode Island Association of REALTORS® and was named the Rhode Island’s “REALTOR® of the Year” by his peers in 1995. Active in his community, he was one of ten finalists in the NAR “Good Neighbor Awards” in 2001 for his volunteer work with the D.A.R.E. Bike Safety Program. He has completed the 2000 Florida Ironman, the 2000 Boston Marathon and fourteen Save the Bay swims.

Ron is a certified CIPS Instructor, a global speaker/presenter, and a spokesperson trainer. Ron worked on the NAR LEADS leadership curriculum.  He was Chair of the Board of Regents for Realtor University from 2015 until 2020.  He has worked for State and Local Associations across the country: strategic planning, mergers, leadership development, and media/spokesperson training. Ron has presented in all 50 States, 20 countries and 4 continents.