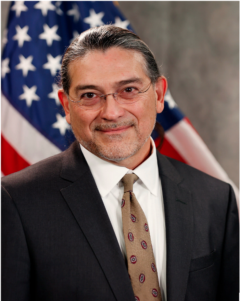 Santos’ career spans more than 40 years in survey research, statistical design and analysis, and executive-level management. He previously served for 15 years as vice president and chief methodologist at the Urban Institute and directed its Statistical Methods Group. He was executive vice president and partner of NuStats, a social science research firm in Austin, Texas.

Santos has held leadership positions in the nation’s top survey research organizations, including the National Opinion Research Center (NORC) at the University of Chicago, where he served as vice president of statistics and methodology and director of survey operations; the Institute for Social Research at the University of Michigan, as director of survey operations; and Temple University’s Institute for Survey Research, as senior study director and sampling statistician.

Santos served as the 2021 president of the American Statistical Association (ASA) and is an ASA Fellow and recipient of the ASA Founder’s Award in 2006. He was the 2014 president of the American Association for Public Opinion Research (AAPOR) and received the 2021 AAPOR Award for Exceptionally Distinguished Achievement. Santos is also an elected member to the International Statistical Institute, and he served from 2017 to 2020 as a member of the Board of Scientific Counselors for the National Center for Health Statistics at the Centers for Disease Control and Prevention. He was a longtime member of the editorial board of Public Opinion Quarterly.

Santos was born and raised in San Antonio, Texas. He graduated from high school at Holy Cross of San Antonio. He earned a B.A. in mathematics from Trinity University in San Antonio and an M.A. in statistics from the University of Michigan at Ann Arbor.