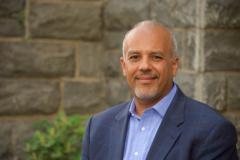 An influential figure at the frontline of politics for more than two decades, Mo Elleithee is the founding executive director of Georgetown University’s Institute of Politics and Public Service. Under Elleithee’s leadership, the institute is developing our nation’s future leaders by pairing students from across the university with elected leaders, political operatives, working journalists, and other active public service practitioners and offering opportunities for them to study and develop better public policies, as well as actively engage in political and public service as a means to carry out sensible policy. Prior to assuming the role of founding executive director at the Institute of Politics and Public Service, Elleithee was the communications director for the Democratic National Committee. As one of the top Democratic communications strategists in the country, he helped political leaders and organizations figure out how to tell their stories in order to break through the rapidly changing media landscape.

Uniquely positioned to provide expert insights on the events shaping the current American political landscape, Elleithee begins his talks by analyzing the hot-button issues that will shape future elections and then taking a step back to define the watershed events that have brought us to where we are in this place in time. He seamlessly weaves the story of our nation’s political history with his forthright analysis on the current state of politics to share a big-picture perspective on what to anticipate from upcoming elections, the narratives surrounding key issues, and the reasons our political system is broken, as well as how to fix it.

Elleithee draws from his insider experience as one of the highest-ranking political communications strategists in the country to explain high-level political concepts in a manner that piques audience members’ interests and keeps them engaged. Connecting with audiences through the same sharp wit and charm he shows when speaking on the nation’s leading news networks, he crafts a striking and optimistic story of America today, while leveraging his political communications expertise to decode the rhetoric permeating the public conscious from both parties.

Elleithee is a veteran of four presidential campaigns, including serving as press secretary on Hillary Clinton’s 2008 campaign. He has worked as a campaign strategist for countless senators, governors, and other federal, state, and local candidates in every region of the country, and he advised the independent expenditure campaign arms of both the Democratic Congressional Campaign Committee (DCCC) and the Democratic Senatorial Campaign Committee (DSCC).

A frequent political commentator on cable news and radio for several years, Elleithee was named a Fox News political contributor in the Fall of 2016. He has also been recognized in Washington Life Magazine’s “Power 100” list, as a “Top Influencer” by Campaign & Elections Magazine, and featured on Washingtonian Magazine’s “Guest List.” Elleithee was a founding partner of two of Washington’s leading political consulting firms, Hilltop Public Solutions and Three Point Media. He earned his undergraduate degree from Georgetown’s School of Foreign Service, and an MA in political management from The George Washington University.