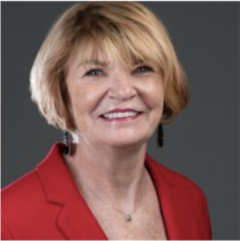 Lin became a REALTOR in 2004. It wasn’t until 2011 that she joined her local Women’s Council of REALTORS when she was asked, and it was suggested she would make a great President-Elect. Since that time, she served in 2013 and 2014 as Kansas City’s Local President. She held positions on the State Board and has served as a Missouri REALTOR Board of Directors and been involved in their O2 output groups. She was the 2020 Missouri State Women’s Council’s President, yes, the Pandemic President. Zoom may have been a challenge, but she made amazing friends nationwide and was able to add to her earnings through referrals. Since then, she became one of the first State Liaisons in 2021 and has been blessed to serve again in 2022.   In 2021, National formed the Social Media Influencers Facebook group. As always, Lin took this job to heart and posted regularly. This year she chairs the group.

Lin believes in Homeowner property rights and supports as RPAC President Circle investor. Her “Why” is the Leadership she has grown in, but most importantly, it is the members she has been honored to mentor and watch grow and succeed, not only locally, but statewide and even, nationally.