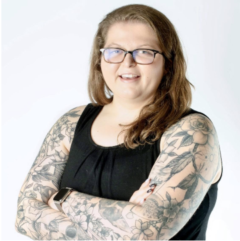 Joli Waldeck is a top producing real estate agent in Las Vegas, NV. After receiving her license at the age of 18 she joined forces with her Mother, Lisa Waldeck, and the dynamic duo are a force to be reckoned with.

Joli became a member of the Women's Council of REALTORS® and eventually served on the local board for 6 years; where she was honored with the award "member of the year". Since then, Joli has served as a social media influencer on the National level. From there, she became a National Speaker and Trainer for boards around the United States. In 2020, she co-founded "Sam and Joli" a virtual training company where she teaches classes on social media, marketing, and branding. Joli has taught over 130 classes in the past 18 months.

Joli is also an advocate of mental health, her tattoo collecting journey started with a sleeve on her right arm, which encapsulates mental health awareness. When she is not selling real estate or teaching courses you can find Joli at a tattoo shop, eating tacos, on her Peloton, driving her ‘64 Ford Ranchero or at "Our Someday Farms" in Virginia where she visits with her pig, Charlotte.